ENZYMES.....
Enzymes:
Enzymes are the biological catalysts. Living organisms carry out thousands of chemical reactions which take place in dilute solution at ordinary temperature and pressure. For example they can use small molecules to assemble complex biopolymers such as proteins and DNA. Organisms can produce molecules that combat bacterial invaders. They can break down large, energy-rich molecules in many steps to extract chemical energy in small portions to drive their many activities.
Most of these reactions are catalyzed by biochemical catalysts called enzymes

Enzymes are protein catalysts that speed up the chemical reactions necessary for life
Enzymes are a type of protein. Proteins are made out of a long chain of amino acids (a group of small chemical molecules). The amino acid chain is a folded into a precise shape that gives the protein it's function.
Enzymes act as biological catalysts, meaning they speed up chemical reactions without being used-up themselves. The names given to enzymes typically end with -ase  Eg: Lipase catalyses Lipids, Lactase catylses Lactose, etc

Lock & Key Model:
The part of the enzyme where the substrate binds is called the active site. Enzymes are highly specific and will only bind one type of substrate. It was originally suggested that this was because an enzyme and substrate both possess specific complementary geometric shapes that fit exactly into one another. This is often referred to as "the lock and key" model. An enzyme only fits one particular kind of substrate in the same way that a lock only fits one particular kind of key.

The Induced Fit Model:
The lock and key model was later revised slightly. Since enzymes are rather flexible structures, the active site is continually reshaped by interactions with the substrate. As a result, the substrate does not simply bind to a rigid active site; the part of the protein which makes up the active site is moulded around the substrate for an even more precise fit. This very slight change in shape (conformation) is what allows the enzyme to carry out its catalytic function. 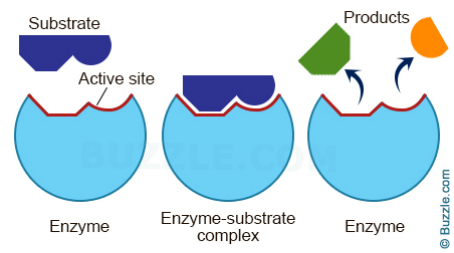