Motion- this is the "way" something is moving- an object is in motion if its position is changing...
​Characteristics of motion are:
Objects have a speed, they travel a distance, have direction and could be accelerating or slowing down (decelerating).
​When describing the motion of an object like a car we use quantities  like time, distance , speed and acceleration.

SPEED - is the "rate" at which an object is moving.
To calculate Speed we use the equation:  SPEED = DISTANCE / TIME
Because most times the direction of the object is always given- we use Velocity as our Speed. Velocity is speed in a particular direction.
Average Speed - is a measure of distance traveled each hour, min or second. The average speed (v) for a journey is calculated from the TOTAL distance travelled divided by the TOTAL time taken 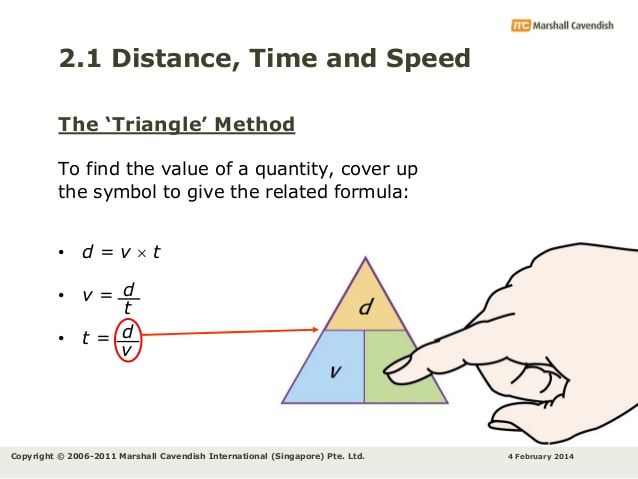 We can re-arrange the formula's above to find distance OR time.

Instantaneous Speed - is the actual speed at any moment - for example if you looked down at the speedometer whilst travelling in the car - the speed at that particular instant in time would be termed the instantaneous speed of that object - it will usually change considerably during a car's journey.
If it does NOT change then that objects speed is termed constant, uniform or steady !

DISTANCE - TIME GRAPHS:
​These tell us about an objects type of SPEED !!!!
These graphs plot the objects journey from start to end point.
They can be used to calculate the average speed AND the SLOPE of the graph also gives us information about the objects type of motion/speed !!
Check out the video below 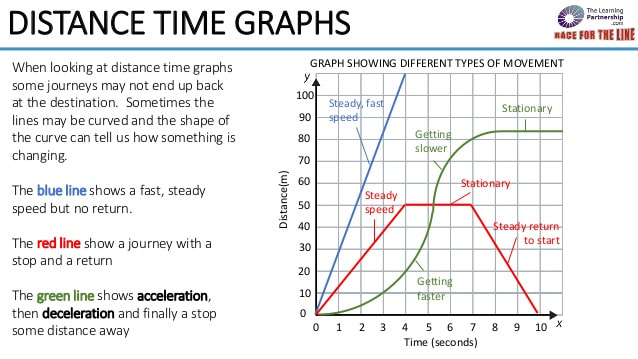 Calculating the SPEED using a DISTANCE-TIME Graph .....
The GRADIENT or SLOPE of a D-T graph tells us about the objects SPEED in ms-1
To calculate the speed we use  rise/run or Distance/Time.
​We must be careful to only calculate the speed for the section asked - so check values carefully in questions!!

The average speed can be calculated for any part of a journey by taking the change in distance and dividing by the change in time for that part of the journey. You can even do this for a curved line where the speed is changing, just remember that your result is the average speed in this case. You may also notice that the formula for calculating speed is sometime written with small triangles Δ (the Greek letter delta) in front of d (distance) and t (time). The Δ is just short hand for "change in". Therefore Δt means "change in time"

How do you calculate the "change in speed"??? - you can use the equation -  V final - V initial (starting speed)

FORCES:
Forces are a push, pull or a twist.
A Force is something which will change the motion of an object. A Force applied to an object may change the objects speed, direction or shape !
(If the force causes an object to speed up = accelerate or slow down = decelerate)
Forces act on everything !!! Often there is more than one force acting on an object. When this happens  it is the resulting combination of all the forces acting that will affect the MOTION.
The Resultant force is called the Net Force  - F net .  Forces acting in the same direction are added together - forces acting in opposite directions are subtracted and the difference/result becomes the NET FORCE !
A FORCE  F -  has both a size and direction. The size of the force is measured in Newtons N and the direction of the force is shown with an arrow !
When all the forces acting on an object are BALANCED - then the Net Force is zero. If the object is already moving then it will move at at CONSTANT speed. If it is not moving then it will remain STATIONARY.
​
When forces acting on an object are UNBALANCED - there is a NET FORCE acting and the object will ACCELERATE and DECELERATE  - in the direction of the Net Force!

AIR RESISTANCE:...how does this work ?
Mass and Weight
MASS is a measure of how much "matter" there is in an object. Mass remains the same even if the location does not ie: our mass it the same on earth as it would be on Mars.
Symbol- m
Units - Kg or g

If we are given the mass of an object we can work out its weight force /F net by multiplying it by 10.

When we get scenarios with STAIRS, HILL's or LIFTING....this probably requires us to use the  f= m x g in order to find the force as the first step 1 the working out !!! Then we can use the F = m x a equation.

​​PRESSURE:
This is how much Force is put into a particular area. So the amount of pressure depends of 2 things. SO Pressure is acutally Force per unit area - so we use the UNITS - Nm2 (squared) OR PASCALS- Pa
The EQUATION we use for Pressure is:

Kinetic Energy:
This is the type of Energy all MOVING objects have !
See equation AND Units below...

​
WORK
In science WORK has a special meaning and defined as "the amount of Energy transferred"
It is also often explained as the "ability to do work".
WORK is DONE (ie: energy is transferred) if a object is MOVED over a set distance in the direction of the Force.
So the equation we use: